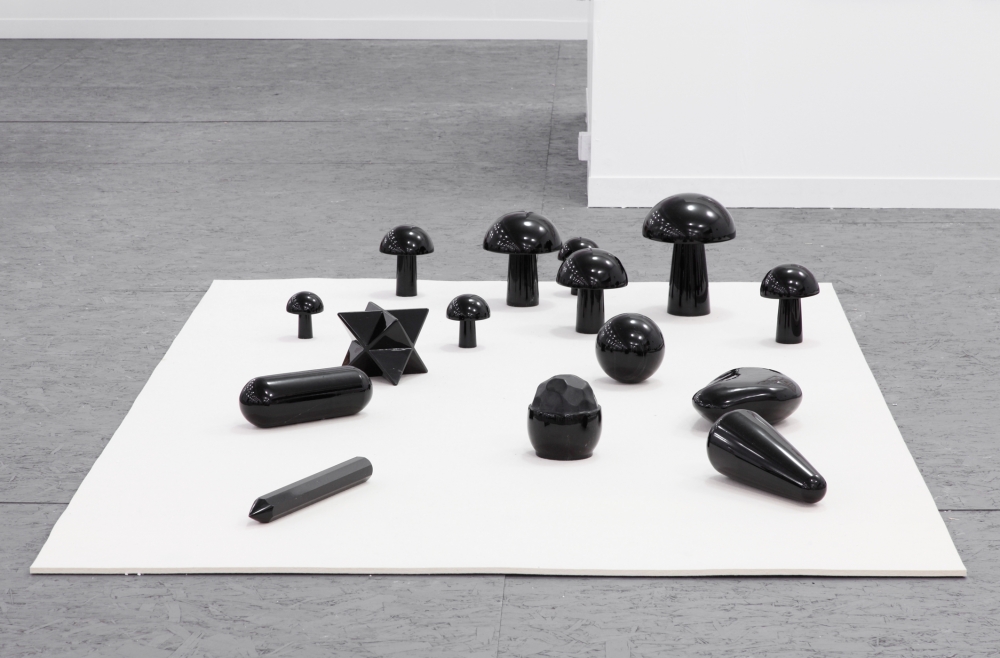 José Damasceno’s constructions, which presume knowledge about space, the poet’s imagination and mathematical precision, often appear as visual enigmas designed to confound us. Sobre o Objeto de 8º grau makes us tread a path on which refractions, reflections and illuminations come together to produce a resounding topos.

The title, a direct allusion to a text by Macedonio Fernández, aims to expand on the writer’s La imagen de septimo grado, which, as it echoes from reflection to reflection, produces mental and physical ‘inscriptions’. A specular and speculative space is created by obsidian objects found by chance by the artist. It is as if he had taken his obsidian pencil and drawn his 8th-degree topos, his place of regeneration.

A collection of sundry objects (mushrooms, a capsule, an ovoid, a sphere, a pencil, a pot containing some amorphous matter, a stellated octahedron) and a collection of jigsaw puzzle pieces. Eight pieces (each one with three parts). Eight, the symbol of regeneration, the emblematic number of baptismal waters, the sign of infinity.

The work began outside itself, through the random encounter with the obsidian pieces. It then continued in a second phase, when the artist brought his insights and perceptions to bear on his collection of objects. What matters to José Damasceno is that the objects emerge or appear concomitantly with the ideas. As stated by Schelling, the guiding philosopher for the romantic school: an artwork is at once an object and an idea.

In aesthetic terms, the work offsets black and white in stark or sober contrast. The blackness is the volcanic rock, while the whiteness is the natural felt that surrounds it. As he walked around the streets of Guadalajara, Damasceno came across a three-dimensional jigsaw puzzle, a single unit broken into parts. Bringing together objects in these specular collections, he presents the relationship between them, which is just as important and substantial as the supposed solidity of the objects themselves.

There are various objects but none of them is exactly, or precisely, of the 8th degree. Where is this 8th-degree object? Is it hovering over the objects? Is it in the relationship between them? Or is it all the objects at the same time? As always in Damasceno’s works, it is all about shaping, forming the manifestation of a thought process, an idea, whose full significance eludes him.

If this collection of unusual or curious objects indicates a sort of imaginary artistic-archaeological excavation, the pieces of the puzzle denote the starkness and rigor of mathematics. The objects made of obsidian can be called ‘unusual’ or ‘odd’ because they beg the questions: Why them and not others? What are they doing here? What do they generate here and beyond here? Their circumstances are enigmatic.

The artist takes pleasure in being contemporary without yielding to the vulgate of the media or contemporary instruments of caricature. The oval-shaped obsidian piece (mirror) on the wall constitutes a commentary on the idea of both the portrait and the (enigmatic) identity of what is being exhibited.

Antenor Nascentes tells us that obsidian, ‘as black as pitch’, chosen to be the soul of the exhibition, is ‘a lustrous, black stone discovered, according to Pliny, in Ethiopia by a man named Obsius’. A volcanic glass formed from the ‘cooling of viscous lava’, obsidian can be used to make mirrors, objects that reflect back not so much the image of things as their shadow.

José Thomaz Brum holds a PhD in philosophy from the University of Nice and is a professor of aesthetics in the postgraduate course in Art History at PUC-Rio.