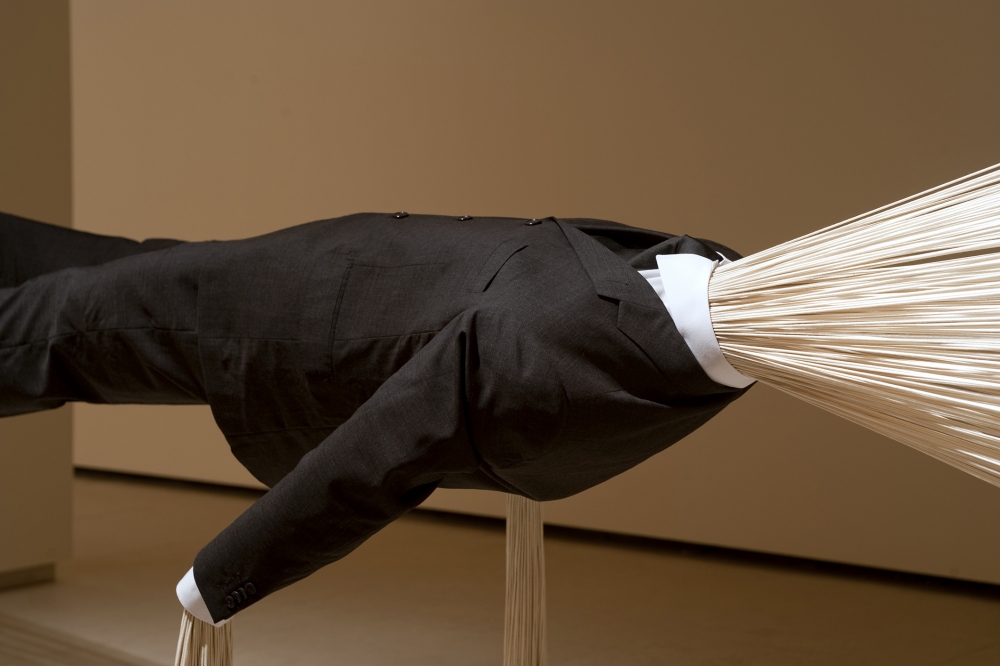 The Science Is Astonishing​

The works by José Damasceno are shot through by a disquieting virtual pulsation. Nothing changes position or moves. Rather, what one sees is the static coexistence on all levels, in time and in space, of a process continuously underway. The occurrences alluded to by the sculptures, installations, drawings and photographs are implicit in the forms imbued by an intense and apparently uncontrollable propagation. Both his bidimensional and tridimensional works have a power of synthesis and signification that stems nearly from their condition of origin; a power that is more than representational but less than evidential. The artist’s pieces are thus placed into continuous and vibratory activity by the serial arrangements or the bulky conglomerations of material, figures, or words, and by the open, enigmatic or incongruent scenes with objects imbued by the practical function of action. Strictly speaking, it is not the things, but rather the state of the things – the set of possibilities for occurrence given by the relation among the elements in each circumstance – which is in constant transformation.

For this reason it is hard to say that Damasceno’s pieces “result” in something. For the most part, the actions involve circulation, accumulation, spreading and condensation. Transitive and endless, they are suspended in a present that has the potential for change, or is constantly about to change – in a simultaneous state of action and potential. Sometimes mechanical, sometimes with an organic aspect, the successive repetitions of the forms allude directly or indirectly to the passage of days, with references to the past, when that thing developed, and to the future, by induction and unfoldings. One never knows how, when, or why the occurrences began, the phase they are now in, nor which elements are respectively the agent and the action (as they are indistinct from each other), much less where all this is going. The work’s internal logic makes no mention of causes and effects. It is content to organize situations that throw the “world of things” into upheaval – by attributing behavior to the inanimate, conferring physical consistency to the intangible, and engendering phenomena in the real world outside the primacy of technical rationality – only for the purpose of speculation. The science of the work astonishes; it does not wish to draw a conclusion.

Since the outset of his career, in the tridimensional investigations with the abstract-geometric vocabulary he carried out from 1989 to 1993, Damasceno has proposed the comparison of two or more physically independent elements which are related by equivalence, differentiation or complementarity. The work does not consist of one or another component, but rather takes place between them. Interaction between the parts gives rise to a sort of disjunctive, nonconciliating whole, in which singularity and repetition, identity and estrangement are concomitant. The mental field that is opened in these gaps tends to be a further body in the setting: reflexive, doubtful and amusing. In the artist’s first sculptures, the decisions dealt with variables of formalization, as seen in the two equal masses of iron (Sólido [Solid], 1993) as well as in a set of three structures, each made by the joining of three identical wooden strips (untitled, 1989, in the collection of the Museu de Arte de Ribeirão Preto). The works he has made in the last ten years commonly involve the spatial distribution of items with diverse natures, scales and registers of visuality, like the miniature golfer hanging from the ceiling upside down above a giant golf ball made of marble, on the floor (Ultra mini golf, 2004), where the distance between them is an essential and intriguing factor.

What unites such distinct works, besides the equation between space, tridimensional figures and the void, is the ability to suggest an occurrence through the strategic positioning of the elements – “situating is tantamount to inventing.”[1] What makes them different is related to how his production developed: in the early 1990s, the artist began using a wide range of materials, objects, surfaces and procedures to investigate the possible geometric combinations that a given volume or extension of material can be submitted to, thereby critiquing socially established uses and meanings.[2] Since then his production has expanded in many aspects. It has assumed various ways of appearing, appropriating or evoking the physiognomy of things in the world, acquiring a powerful imaginative charge and leading the formation of his language into an experimental dimension that cannot be pigeonholed into established categories. By articulating different formats, supports and solutions, the work not only resists any labeling in terms of “style” or the pure and simple valorization of the specific means of its execution, it also interlinks areas of knowledge, fields of human activity and spheres of public or private life, aiming to infiltrate these systems and overturn them.[3]

In pieces made from 1995 onward, Damasceno seems to lend concrete form to stealthy forces (perhaps underground ones, or arising from some secret instance of the objects?) which burst forth in conjunctures that are otherwise ordinary. They shed light on the raw manifestation of flows, proliferations and shufflings, by animating and destabilizing what we once considered as reality. By twisting and contracting time and space, they bring about the confluence of plural stimuli into a single point. Here, we find the concentration of different forms, thicknesses, consistencies, densities and textures; discordant proportions and sizes; heterogeneous languages and codes; indices of dissonant contexts that are everyday or uncommon, real or fictitious, tangible or intangible; competing processes of construction and deconstruction, of the branching and convergence of structures; units of time measurement (yesterday, today, tomorrow), now simultaneous.[4] This often dizzying dynamics of associations and clashings evinces how the work synchronizes its multiple interests. Or how it creates passages from the bidimensional to the tridimensional field, or vice versa, from imagination to actualization, from image to thought, from one thought to another, from one sensation to another, from recognition to perplexity.

Dialectics is the motor that drives the artist’s work. There is no margin for rest where a peculiar type of kineticism presupposes – like a frozen cinema – not movement, but a complex of contingencies in the interrelation of contraries. Nor does it involve the establishment of binary interplays, between order and disorder, familiarity and the absurd; rather, the aim is to place the perception before a perpetual motion machine of oscillations driven by a rigorous economy of construction and high-voltage ideas that are resistant to both clairvoyance and meaninglessness. In the context of recent Brazilian art, Damasceno can perhaps be considered in connection with artists ranging from Franz Weissmann (1911–2005) and Sergio Camargo (1930–1990) to Waltercio Caldas (1946), Cildo Meireles (1948) and Tunga (1952), at least as an attempt at opening up a historical perspective, of tracing lines of continuity and branching, for an experience of art as a device of sensorial paradoxes involving off-limit regions of knowledge. Because there is no name that can be given to what goes on in Damasceno’s works, whether the facts have the solidity of stone or lie at the threshold of the formless. Mystery is mystery; all that’s left is to meditate about it, yesterday, today and tomorrow.

[1] The artist used this phrase as the closing of the text “Tópicos topo-ópticos,” presented at a lecture at Museu Vale, in Espírito Santo, in 2009, during the seminar “Criação e Crítica.” See: http://www.seminariosmv.org.br/2009/textos/03_damasceno.pdf.

[2] In this sense, Método para arranque e deslocamento “Method for Pulling Up/Starting Up and Displacement (1992–93), presented at Damasceno’s first solo show, at Espaço Cultural Sérgio Porto, in Rio de Janeiro, in 1993, indicates a high point in the artist’s still incipient artistic path, in light of following: after covering the floor of a narrow 60m² room with gray carpet, the artist cut four long strips beginning at either end of the carpet and extending nearly to the other end; these cuts left the floor exposed, and with the strips that were removed (in the ambiguous title, the Portuguese word arranque can mean either “pulling up” or “starting up”) the artist constructed two volumes, both in a roll, one elliptical shaped and the other in the form of a spiral, as well as a relief with biomorphic borders. These creeping, low-lying sculptures attempt to lend some rigidity to the material’s malleability. Nevertheless, they emerge from the floor like speeding extensions of the racetracks opened by the cuts in the carpet, and they literally crossed through the space, subtly suspending segments of the floor. In fact, everything begins with nothing more than the carpeting of a predetermined area. But ultimately, through the operations of making the work and cutting it apart, the artist defines and realizes a place there.

[4] Not by chance, a work that formalizes a nonlinear temporal notion has pervaded the artist’s path since 1997. Organograma consists of the simple serial arrangement of the words ontem [yesterday] hoje [today] and amanhã [tomorrow], either in drawings and collages on paper or the wall, in sculptures that resemble necklaces with ceramic beads several meters long, or in a set of neon signs installed on the façade of a museum (the Museo Reina Sofia, in Madrid, in Spain, in 2008). The words can be distributed in diagrams of relations without hierarchy, they can designate networks of graphic diagrams like those used to represent biological phenomena, or they can be organized in lines and grids, in alternating successions of “amanhã, ontem, hoje,” “hoje, amanhã, ontem.” The days advance, and they go back; they are multiplied, spread, and crossed, which also winds up reproducing how the artist works with his materials.