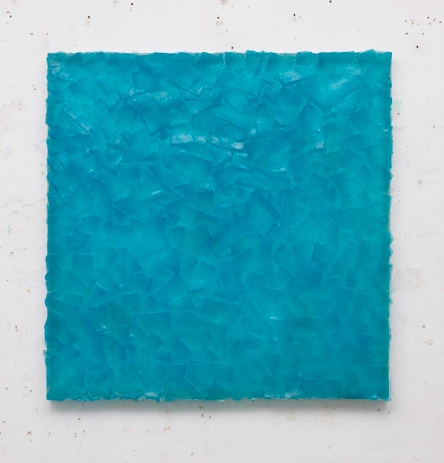 Essay: Appearances are not deceiving

A lesson learned from art: appearances are not deceiving. Whereas science calls the senses and all that is seen, heard, smelled, and tasted into question, art thrives on appearance. Art consists of materializing a thought before the senses. For many years, this is precisely what Dudi Maia Rosa has been doing: materializing a radical thought through his painting. Educated (not to say “tamed”) as we have been under the domain of science over more than two centuries, we mistrust. We are not keen on the taste of things, as they arouse suspicion. Why so? In the case of this painting, where are Volpi’s brushwork and delicate tempera? Where is the voluptuousness of the highly intelligent color contrasts seen in Eduardo Sued’s oils? And, as we reach a bit further: Where is Pollock’s radical assumption of the plane on canvas, one that brings Cézanne’s revolution to an end by pouring industrial paint on fabric? Would it be in the so reiterated hypotheses of structures of the unconscious? Not at all. From Maia Rosa’s early investigations with new media, in 1984, we have had before us—and this is hard to accept—an original pictorial happening, something that in fact we had never seen before.

Once again, the lesson learned from art: appearances are not deceiving. By and large, the artistic happening is met with resistance out of sheer prejudice. A notion prevails that painting is an occurrence made visible by a handcrafted process inherited from the Renaissance—painting executed in diverse media that include fresco, tempera, oil, and acrylic, among others. Let us picture the reaction of fresco and tempera painters and their audience upon being introduced to oil painting. Without a doubt, their resistance was the all-time most conservative. And then there is the vanguard group, those who accept transgressions in space or in the combination of things, masses, and strange objects, and today welcome and understand media ranging, from collages by Braque and Picasso to voluptuous and generous invasions of space by Nuno Ramos. For a long time now no one has been astounded by transgression. As regards the work of Dudi Maia Rosa, the problem is that we stand before a painting on the wall, a flat surface that acquires a certain mass, or bulk, since in fact there is neither support nor painting by themselves, both are one and same thing. It is an unusual type of work that, however, has strong identity ties with the painting as thing. If, on the one hand, it parts with the use of materials banalized by the industrial production of run-of-the-mill, everyday objects, on the other hand, it resembles it in terms of demeanor or appearance. Maia Rosa’s work is not a parody of painting; it is painting, in and of itself. Identity is diachronic, and difference, synchronic. In other words, such strong identity with painting is visible from format all the way to the expression contaminated by a long-standing, modern tradition of abstraction in which similarities are intensified—a very solid temporal axis informed by the relevant presence of Brazilian art since the 1950s; on the other hand, the difference is intensified by its brutal contemporary reality, when everything real or imaginary exists side by side, one cannot ignore the painting that coexists with it. In the differentiation process, plastic as solidified resin—a pop art material par excellence, if such material could ever exist—further enhances the nearness of the work. Maia Rosa’s painting is a thing, in a sense that Heidegger pointed out in an essay: “What is happening here when, as a result of the abolition of great distances, everything is equally far and equally near? What is this uniformity in which everything is neither far nor near—is, as it were, without distance?”

Such paradox becomes clearly visible in these paintings and, possibly, this is where the potential of its meaning resides. By drawing near to the identical, and drawing apart from the different, by being painting and nothing more in terms of identity—an identity from which it draws apart in the original procedures of its crafting and, in particular, in the use of raw material—, through this interplay Maia Rosa’s work promotes the abolition of distance from which its powerful presence results. Evidently, his work is far from evoking the ready-made. On the contrary, here painting results from a careful and painstaking craftwork that makes the pigmented resin emerge from under the work’s surface. The artist’s recent paintings present two significant differences in relation to his previous production. First, the slightly rugged surface that contributed to add movement has disappeared; it was a feature of expressive lightness that is no longer present. The new smooth surface results from the resin spreading on a glass that leaves no trace; now the movement is completely contained by the immediately preceding “layer” from which the pigmented resin springs up towards the spectator. The new and smoother surface reflects the environment, the painting’s surroundings that become one with its colors, and not by chance: it is an integral part of the work. Another difference is that the color surfaces are enclosed, sometimes by a frame--like color area, sometimes by color bands that add movement and lead the spectator’s eye in a circular gaze, a true rotation. Thanks to its generous, and yet not exaggerated scale, the smooth surface relates directly to the full-scale body of the observer, creating a fruition regimen that is different from paintings I have seen since the very beginning of investigations with resin. In Maia Rosa’s work, two bodies come face to face—the work’s and the spectator’s—, thereby offering a complete fruition of the work and the solution of the conflict between support and surface.

In a sense, the solution that the artist has devised for his painting follows a different course than that devised by Brancusi in sculpture, to treat the pedestal. In terms of language, the sculptor’s solution involved giving the pedestal a status of artistic element, hence the transformation of sculpture into an ingenious syntagma. Maia Rosa’s paintings do not feature the juxtapositions or connections found in sculpture. In his elucidative synthesis for the painting experience, the artist has overlooked the package dialectics adopted in France, in the early 1970s, to deal with a contradiction between support and surface. As a positive result, this confrontation brought to the French, with a delay of more than twenty years, the awareness of the great contribution by the U.S. Abstract Expressionism. Only then it dawned on the French that, after Matisse, other things had happened in the realm of painting besides Soulages—even though, to ponder the same problem well before the support/surface issue, they had at hand an artist of such high standing as Yves Klein. Why make this assertion about the contribution of this painting? Unlike Brancusi, or even Klein, Maia Rosa’s work does not “narrate” its construction. It does not expose its vertebrae; it does not abide by rules, norms, or procedures: it is neither an organless body nor a bodiless organ, it is at once body and organ. Under no hypothesis this painting could be viewed in terms of the disjunction or articulation of its elements.

Devoid of the irony that distinguishes Klein’s work, Dudi Maia Rosa’s pictorial operation resolves a problem and features a touch of romanticism in its effort to intensify the immanent materiality of painting. It comes forth as an Absolute to be rendered completely, here and now, in both its own unity and the sheer materiality of a thing. There are neither interior relations nor other essence besides the one we see. Appearances are not deceiving: Maia Rosa’s painting comes forth as something unique in all senses. And if something gets in the way of pondering these paintings, it is their extreme beauty. Why reflect on something that is so evident and which appearances are not deceiving?